On June 4th 2010, the centenary of Sir Christopher Cockerell’s birthday, at 2.30 pm precisely,   Sqdn Ldr Duncan Mason from the RAF Battle of Britain Memorial Flight piloting a Spitfire, gave a Flypast in honour of Sir Christopher’s WW2 work for Bomber Command. As the aircraft climbed away in a final salute, Lady Somerleyton formally opened the event with a short  speech and introduced Frances Cockerell. 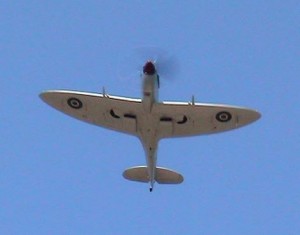 Very few public memorials in England are dedicated to great engineers or their works and a small group of people brought together by Lord Somerleyton, decided to raise a fitting Landmark at Somerleyton in Suffolk to identify it as the birthplace of the Hovercraft, and as a tribute to  the inventiveness of Sir Christopher Cockerell. The Hovercraft Column was designed by James Airy ARIBA and completely fits the village scene and vista while providing for a bronze identical in scale to the original Prototype Model. It stands beside the main road (B1074) between St Olaves and Lowestoft.

Cockerell joined the Marconi Wireless Telegraph Co., in 1935 and within a few years became Technical Head of the Aircraft Research & Development Dept.  He was an accomplished electronics engineer with thirty-six patents bearing his name when he resigned in 1951 exhausted by the pressures of WW2 and the years that followed. A family decision brought him to a new beginning designing and building boats for Broadland holidays, and they established a boatyard called Ripplecraft at Somerleyton.

Although building their fleet of Leisure Craft had priority, Cockerell was always full of ideas and something began stirring in his mind about making boats go faster. There was no time available to experiment until 1953, a year notable for the coronation of Queen Elizabeth II, and for the winter that brought the worst flooding for fifty years. Gradually a little time to develop his ideas began to be woven between the requirements of the boatyard, where building a new broads cruiser every year was essential. Thus he  began the experiments leading to his invention of the amphibious ‘Hovercraft’, a word that did not then exist in any language. There followed almost three years of experimental work all carefully recorded, until in December 1955 he was ready to protect his invention with a provisional patent, from this a working model was built to demonstrate its definitions and claims, see Somerleyton page.

The frustration of having to search and wait for funding was hard to bear and Cockerell approached Lord Somerleyton. Thus it was Francis Savile Crossley MC, the second Lord Somerleyton, who was instrumental in bringing the Hovercraft to the attention of Lord Louis Mountbatten in 1956; he was then first Sea Lord.  From this new technology, exemplified by the prototype model  patent, Saunders-Roe designed the SR-N1 and today Hovercraft are used in seventy countries across the world.

Cockerell was knighted in 1969 and received thirty-eight honours and ninety eight patents during his life. His patents reflect his work pattern, Mechanical engineering, Electronic engineering, Small Craft design, Hovercraft, Wavepower, and intense personal research of everything unimaginable by most.